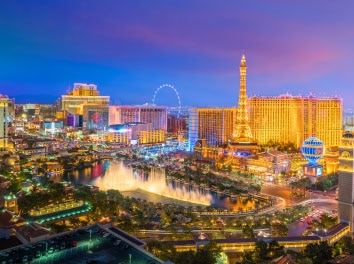 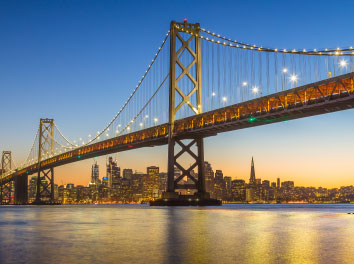 The most liberal city in America
San Francisco 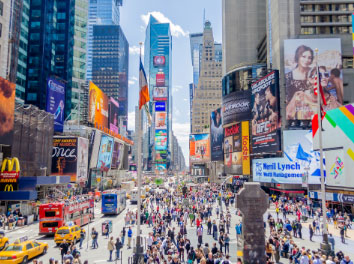 The city where dreams are born!
Nueva York
Type of trip
Everything you need to know
Language

ET- ‎CT-MT Atlantic , The Eastern, the Central, the Mountain, the Pacific, the Alaska, the Hawaii–Aleutian, the Samoa and the Chamorro standard time zone

The North American adventure encompasses an endless array of attractions: prairies and beaches, snowy peaks and sequoia forests, cities famous for their cuisine, and vast open skies.
The United States is home to Los Angeles, Las Vegas, Chicago, Miami, Boston and New York: huge, thriving metropolises whose names evoke a multitude of cultural, culinary and leisure possibilities. By devoting enough time to really getting to know it, the country will reveal its astounding variety the eclectic music scene of Austin, the peaceful charm of antebellum Savannah, the environmentally aware and liberal city of Portland, the wonderful seafront promenade in San Francisco, and the intoxicating old quarters of New Orleans.
This is the land of road trips and interminable skies where more than six million kilometres of highways plough through red rocky deserts, twist through mountains and criss-cross vast field of wheat that stretch out towards the horizon.
The sun-drenched slopes of the Great Plains, the lush temperate rain forests of the Northeast Pacific and the picturesque country lanes of New England are excellent places to begin your US adventure.
The unbreakable heart and soul of the United States beats to the rhythm of its popular music. It is John Lee Hooker’s deep growl and John Coltrane’s passionate outpouring. It is Hank Williams’ yodel and Elvis’ sneer. It is Beyoncé and Bob Dylan, Duke Ellington and Patti Smith. It is the heartbreaking sound of Janis Joplin, the tormented cry of Kurt Cobain and the hypnotic chorus of Johnny Cash in ‘Walk the Line’.
Music has been the USA’s most influential art form. Blues, jazz, country, rock and roll, hip-hop: the soundtrack to the USA, its evolution during the 20th century, and its present day. The world has made it their home too, creating a multicultural, joyful and spontaneous celebration of cultures where the lines between genres and styles blend together. Just when you thought that pop music could not reinvent itself further, have a look at Gwen Stefani, Britney Spears or Lady Gaga, taking on the pioneering spirit of Madonna, but in a bold new way, and blending genres, defying expectations and breaking the rules once again.